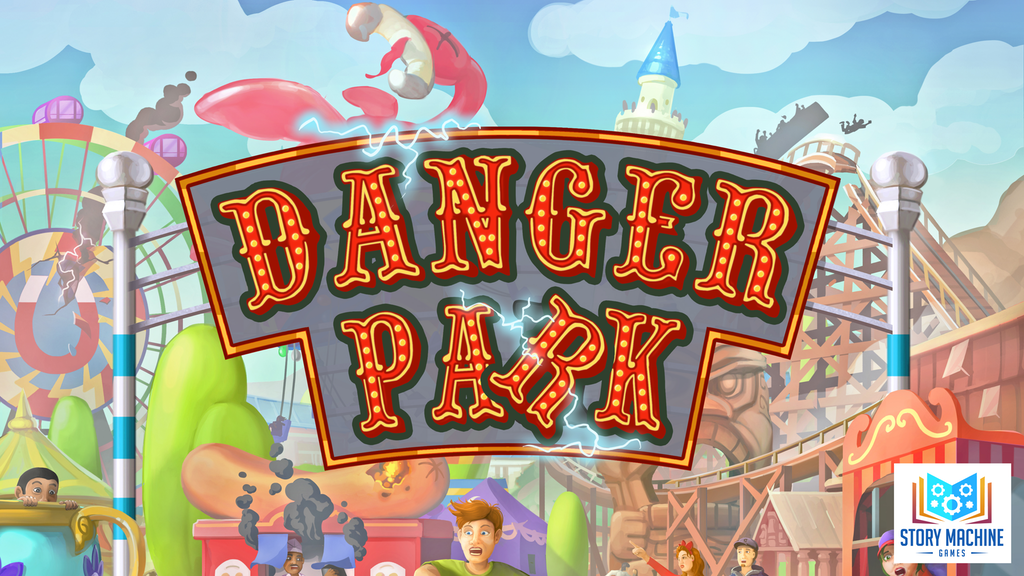 Danger Park is a light-weight map-building game of sabotage and fraud for 2-4 players. During play, players act as investors in a failing theme park, attempting to make as much money before the park is closed due to injury, illness, and general destruction. Spread infestations, leave dangerous malfunctions, and collect convenient insurance policies. Over 30 unique rides with beautiful art by Moy Shing Hung, and a deck of powerful improvement cards to add chaos to the process of out-profiting your friends & family.

Latest Updates from Our Project:

Hey folks! A bit of a lengthy content update here. Just wanted to take the chance to show off and discuss the rides contributed by Dubious Investors! At this pledge level, folks helped make wonderful and horrible new rides for the park through name, quote, art ideas, and ability suggestions. It was quite a process while the rest of pre-production was wrapping up, but now we have settled on how they will function in the game. Let's get to it!

Note: We still have a small window to make adjustments so these are pretty close, but not complete.

The only ride that allows you to reroll, the Alpine Slide of Doom is fantastic for all those park owners who wish they could say, "Thanks for the vomit!" Some clever placement can ensure one of your other rides catches single patrons as they hurtle down two spaces.

The Cholesterol Corral honors a piece of New Jersey lore- the infamous 'grease trucks' that used to gather and offer up particularly hodge-podge-yet-delicious sandwiches. You can feed just about any type of danger to patrons on this ride to make it safer, but it will come back to haunt you when the people get sick! There is even a special washboard performance by the one of the park's unofficial mascots, Uncle Gristmore.

Contributed by a fantastic local haunted house, the Very Flammable Hayride is mainly a messy attraction in the park. But it is highly susceptible to an accident, and the neighboring rides are just as at risk. Normally four of a specific danger (such as grease) will close a ride, but this ride and its neighbors only need three of a color of danger, making it just that more likely they won't survive.

An otherwise tricky ride, the owner of the Memory Wipe Light Show won't worry about giving up single and group patrons to their neighbors. All those folks don't even remember how they got here... they will be moved to the top of the park to re-enter at the end of your turn, so be sure you keep a ride open up there to take their money!

If you pay close attention, this ride's ability will actually seem familiar. That is because the idea for this one made even more sense for the ability for an existing ride, the Oily Teacups. That ability has made it here, trapping single patrons with greasy tar before charging for the fun. Prehistoric Peril remains a risky neighbor, and a powerful way to steal patrons from a crowded neighbor and turn them into a group patron.

Trash can be quite plentiful in the park. While Maggot Manor seems to dispose of it mysteriously quickly, it seems the whole park has become popular with various garbage-hungry creatures. You got to close this one fast, but if you are not careful, it will just get more chances to release its... problems upon the public.

The Sticky Wall Slam is a challenge to control, but if you play your cards right, it will make you a ton of money. While any danger placed here can never be removed, the same is true of single and sick patrons. You can guarantee quite a bit of tickets sales from them, or even accumulate enough patrons to turn into a larger group, but you can never clean it up.

The Whiplash Carousel only has one exit, but it also has a unique power; every turn it spins, changing up where it will be sending patrons next. This applies even when it closes, and an excellent park owner may use this to their advantage to trap patrons in a loop of their own rides.

Finally, suggested by Alan R. Moon, is the Ticket To Terror. This spooky, festive parade goes all over the park, and has the unique ability of changing locations every turn. This means it may always be picking up and dropping off patrons all over the place, dodging terrible rides and strange effects.

As always, get involved on social media to stay in touch; as we move through production, we will be playing Danger Park live, giving new updates and information, and showing off everything in action!

Howdy everybody! We hope you're doing well and are playing a lot of games—we are, that's for sure. We're staying right on schedule for Danger Park production, and have a few updates to share with you.

In our last update, we announced our partnership with Game Trayz and shared some preliminary renderings. We're finishing up with final designs, and wanted to update you on how they're looking so far!

We continue to work with our Dubious Investors to finalize the rides they're designing for the park. They've come up with some absolutely wicked and hilarious concepts, which are going to add super cool variations and enhancements to the park.

Danger Park artist Moy Shin Hung is making exciting headway into the art concepts for the new rides. We've given him notes for the next draft of these rides, but we wanted to share with you how they look so far! From left to right and top to bottom: Grave Pool, Maggot Manor, Tetanus Twister, Sticky Wall Slam, Farewell Falls, Alpine Slide of Doom, Reflection Misdirection, Cannonball Chute, and Cholesterol Corral.

We're making final design decisions for Danger Park now, including finishing the rulebook, the box, and the remaining cards. We're awaiting final component samples before mass production begins, and we're super happy with how everything is turning out!

As we're finishing up and moving into production for Danger Park, we've been working on a few other projects we'd love to share with you:

We hope to see you at one of our 7:30 PM Thursday night Facebook Live game nights. We're staying active on our Discord as well—hop in to chat about what you're playing, game ideas, and maybe join an impromptu Jackbox game night. Stay healthy, and keep gaming!

Greetings everyone! It's been a strange couple of weeks to be sure, but our team has luckily kept healthy and productive while working from home. And we're not the only ones—we've been hard at work with Game Trayz designing some pretty spiffy storage containers and play aids for Danger Park.

The top yellow tray functions as the park entrance; flip the park sign up into its holder and use the tray to hold money tokens, place patrons  back at the entrance after they try to leave the park, and keep track of  incidents on the park sign itself. The other two trays hold all the park patrons, danger tokens, and ticket booths. The trays fit snugly into the game box, helping to keep the game organized so that there aren't pieces bouncing everywhere whenever you take it on or off the shelf. Cards and rides can sit right on top of the trays, with plenty of room for sleeves or additional content sometime down the line!

Our Dubious Investors and Sideshow Entrepreneurs have also been busy! It's been a blast working with them to come up with new, crazy ways to make Danger Park a little more dangerous.

We're plugging away, and will continue to keep you updated on new backer designs, pre-press components, and more. If you have any questions or concerns finishing up your BackerKits, please don't hesitate to reach out.

We hope you're playing a lot of good games these days! We've started weekly game night livestreams Thursdays evenings on our Facebook; we'd love to see you there. In addition to releasing a free print-and-play version of Rosetta: The Lost Language, last week we also released a free roll-and-write called Roll to Escape, a game where players race to escape from Alcatraz. Check those out on the Print & Plays page on our website, and follow us on social media for more games, updates, livestreams, and more. And if you haven't yet, you can always join us on Discord. Stay safe and healthy in the coming months, and we hope you'll come game with us!

Greetings all! The team is currently socially isolated and working from home, but we have been busy. While playtesting and working with backers on custom rides and improvements, we have also been keeping on schedule with pre-press and final graphics. On that note...

Destroyed art for the original 20 rides is all done, with more updates on the way for the 15 rides designed during the Kickstarter. Rather than talk too much, here are some newer cards next to their front images, and then the rest altogether. Keep in mind alterations may still be made, but that doesn't mean they will look any less cool.

We are happy to see so many folks finishing up their BackerKits. If you have any issues, please don't hesitate to reach out. Nothing is locked or charged until May. And thank you for the well wishes... although we realized too late that we set the survey to have mandatory questions. Our apologies. But regardless, thank you.

Up next will be updates about backer-designed work, preview images of pre-press components from the factory, and more! In the meantime, keep an eye out on our social media. We have released an expanded print-and-play of Rosetta: The Lost Language, and will be releasing additional free printable games over the course of the following two months. We want to keep gaming and entertained, and stay connected. Our Discord continues to be open (https://discord.gg/zaNnSNk) and we are doing our best not to spam folks with emails on our mailing list. Hope you'll stay in touch and game with us!

It has been a great month and a lovely experience. We are excited to make Danger Park the best it can be, and to get it to you as soon as possible. From Ben, Bobby, Jakob, and myself (Jono), we cannot express our thanks for your support, and the process is far from over. We will update y'all on production, design, and playtesting here, via our weekly email, on social media, and also through the Discord (We are going to keep the Discord open, and invite our gaming community at large, to give updates on all our games and events, specifically in a discussion-oriented atmosphere.)

You will soon be emailed by BackerKit, our pledge manager, which will help track your pledge and any future changes to your email address. If you have any questions about BackerKit, their folks can help you, and so can we! You can use BackerKit to pledge late, or to update your pledge to a higher amount.

If you backed at a level that involves adding content to the game, please get in touch! We can be accessed through messages, or directly at contact@storymachinegames.com. We have the game artist already at work on the first round of additional rides, but we want to get your ideas to the table; playtesting is a critical part of the process, and we want to involve you in that as well (As our schedule allows, we will eventually have to work with what we have been given and move forward, to ensure game quality at the time of production.